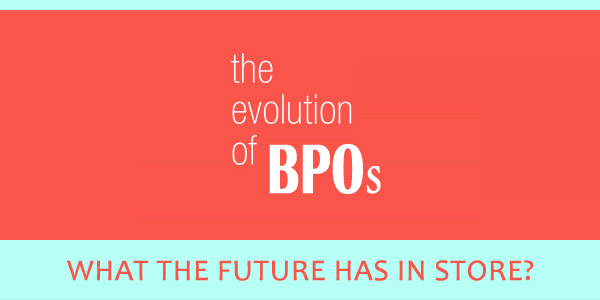 From where it started more than 20 years ago, Business Process Outsourcing (BPO) today has come a long way.  As a matter of fact, the BPO industry is one of the fastest changing industries in the world.

With each technological innovation, BPO industry, as we know it, is going through a sea change. In a proper evaluation of BPOs you can very well understand the evolution of the industry. If you look at the Accenture whitepaper, you will be able to identity 6 generation of BPOs though the ages.

If a company plans to get the most out of their BPO partners, they have to understand the evolution of BPOs and ensure that they are dealing with a BPO with futuristic outlook. So, let’s take a quick look at the past, present and the future of the BPO industry to know the difference.

In early 1990s, the prime focus of the first generation of BPO was cost cutting. Companies used to outsource their non-core operations, around human resources, or finance and accounting to BPOs. This outsourcing was characterized by the rebadging of people within an organization and technology from client to provider in the same locations.

Off shoring was the most prominent feature of the second generation BPOs.  During this stage, global labor arbitrage made it possible to move jobs to different parts of the world that could be done more cost effectively.

By the induction of third generation of BPO, companies began outsourcing a wider range of functions with BPO providers who are focused on industrialization as well as process efficiency.  Leading providers began to use process methodologies such as Lean Manufacturing and Six Sigma to standardize their operations.

Even today cost-cutting remains a valuable outcome from the early generations of BPO.  However, many executives are of opinion that BPO can be a more sophisticated tool for driving innovation as well as business value.

In fact, a survey by Horses for Sources and The Outsourcing Unit at The London School of Economics in 2011 showed that a gap exists in achieving cost reduction and driving innovation. According to respondents, 46% of outsourcing initiatives were effective at operational cost reduction. However, only 11% of initiatives were (as per the respondents) as effective in offering new and creative methods of achieving business value.

At present, in the fourth generation of BPO, the top service providers are addressing this gap, mining huge amount of client data and using analytics to get actionable insights. This added value includes everything from increased speed to market, and stronger customer loyalty, to better talent management, as well as top-line growth.

The BPO service providers of this generation are combining industry expertise with descriptive and predictive analytics to help executives get a fair idea about what is happening in their businesses at this point of time as well as what possibilities the future holds. Based on these insights an effective strategy can be chalked out and in this process, the BPO provider becomes an active partner who plays a major role in their client’s success.

Apart from this value-creation model of 4th generation BPOs, a 5th generation of BPO is emerging. This type of BPOs embrace not only analytics but software-as-a-service as well as mobile technology to offer a more flexible, on-demand BPO service that is supplied to multiple clients via flexible software platforms.

If you look at the past and the present of BPO industry, you will find an inspiring history of progress and development. But what the future has in store for BPO? What will be the next generation for BPOs?

At Fusion, we believe that as the adoption of social networking continues in every sphere, it will help BPO move into a sixth generation. Business people are using such technologies more and more to build networks where members share best and worst practices, as well as discuss solutions to problems.

While there are many BPO providers who are still viewing BPO exclusively as a cost-reduction tool, they are becoming increasingly out of step with what the clients want from a BPO. In order to offer the most value to clients today, providers need to actively accumulate the capabilities of fourth and fifth generation BPO and top it off with social networking integration to make a difference.

Customer Management in a Post-Pandemic World: 5 Ways of Adapting to the Change
Post Date: Jun 20, 2014

The Role of Inbound Call Center Services By A BPO Company In Shaping Customer Experience For Industries.
Post Date: Jun 20, 2014

How Can Hospitality Industry Benefit From A BPO
Post Date: Jun 20, 2014

How The Airlines Industry Can Benefit From BPO Industry
Post Date: Jun 20, 2014